Huawei Mate 20 Pro was launched in India on Tuesday. The Mate 20 Pro is a gorgeous looking device. It feels really slim considering that it packs in so many added features not found on other smartphones. It also packs in an IP 68 rating for dust and water resistance. The flagship smartphone’s big features are its triple camera setup at the back, its full-screen display with a notch up front, and its ‘Hyper Optical Pattern’ textured back panel for better gripping. The Huawei Mate 20 Pro is powered by the latest and greatest 7nm Kirin 980 SoC, and also sports a dedicated neural processing unit (NPU) for efficient AI based functions. The Huawei Mate 20 Pro with its premium look and specifications, is set to compete with flagships like the Samsung Galaxy Note 9, Google Pixel 3XL and the iPhone XS Max in India.

The Huawei Mate 20 Pro has been launched in India for Rs 69,990. There is an additional offer of getting the Mate 20 Pro for Rs 71,990 which will also get you a Sennheiser headset for free.

In terms of optics, the Mate 20 Pro bears a triple rear camera setup identical to the one seen on the Huawei P20 Pro. It has a 40-megapixel primary wide-angle lens with f/1.8 aperture, a 20-megapixel ultra wide angle sensor with f/2.2 aperture, and a third 8-megapixel 3X telephoto lens with f/2.4 aperture. On the front, the handset sports a 24-megapixel RGB selfie camera with f/2.0 aperture and support for 3D facial unlocking. There is a 4,200mAh battery under the hood, with support for 40W SuperCharge technology and 15W fast wireless charging technology. It also supports wireless reverse charging for charging other Qi wireless devices. 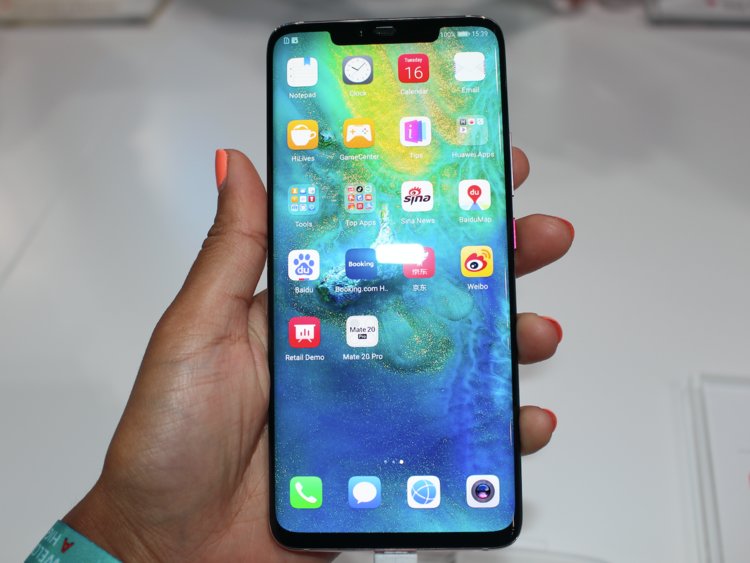 Huawei’s real innovations remained with the Mate series of devices, which have been sold in European and US markets for long. The ultra-premium smartphones never made it to India, just because Huawei had not established itself in the Indian market just yet. Thus far, thanks to the teaser page, we know the new Huawei phone will be exclusive to Amazon India.

The Motorola One Vision has been the subject of numerous leaks lately which have revealed almost everything there is to know about the smartphone’s internals. The smartphone paid a visit to Geekbench and later its detailed specs leaked online. It also popped up on Wi-Fi Alliance’s website bearing model number XT1970-1 and running Android Pie.Leaked by Tiger Mobiles, the latest image shows the phone having a punch-hole display with the selfie camera located on the top left corner. The display has small bezels on three sides and a relatively thick chin. It also shows the phone having a 48MP rear camera.It’s worth noting that the One Vision is called the P40 in some markets, specifically China. The ‘One’ monicker is used for the international variant of the phone. 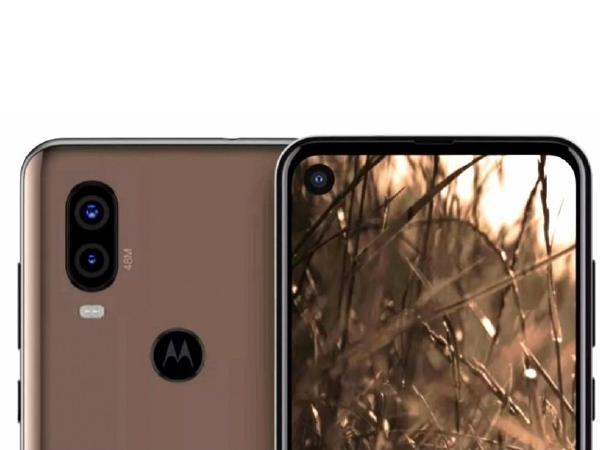 While there are unconfirmed reports about the resolution of the selfie camera, previous reports have claimed that the phone will come with a dual camera setup with a 48MP camera, and the press render attests to the earlier speculations. The dual camera setup is placed vertically on top left with a dual-LED flash.While the biggest and most exciting info so far revealed about the device is that it could come with a 3500mAh battery and a chipset from Samsung. Despite Motorola’s love for Snapdragon processors, the One Vision is set to be the brand’s first smartphone powered by a Samsung chip, more specifically the Exynos 9610. This was recently used inside the Galaxy A50 and can be compared to the Snapdragon 660 when it comes to performance thanks to its octa-core setup.

Other external features look set to include a USB Type-C port and a speaker along the bottom of the smartphone, a volume rocker and power key up the right side of the device, and the fan-favorite 3.5mm headphone jack on top of the Motorola One Vision.As revealed recently, a minimum of 3GB of RAM and 32GB of storage will be present inside the Android One device. But if this isn’t sufficient, consumers should also be able to choose variants with 4GB of RAM and either 64GB or 128GB of storage.

The back of the smartphone, which seems to have a glossy finish, is also home to a fingerprint scanner with Motorola’s signature bat-wing logo atop, and further down below, we have the Android One branding.The One Vision has the SIM card slot located on the left, with the volume rocker and power button sitting on the right. The lockscreen of the phone has the date of April 3 which is when it may go official. You can also see the pill-shaped button at the bottom which indicates the phone will run Android Pie out-of-the-box.As for where it’ll be sold, the expectation is that it’ll go on sale in Europe, Latin America, and even China where it’ll be marketed as the Motorola P40.

Chinese smartphone manufacturer Xiaomi is all set to launch its new smartphone Redmi Go in India tomorrow.Xiaomi typically uses a heavily-customised version of Android – MIUI – on its smartphones, however the company has started deviating a little from its own OS flavour in favour of the Android One and Android Go platforms. The Redmi Go is expected to launch in India at a price of around Rs 4,000, which would make it one of the cheapest Android Go smartphones in the market right now. Xiaomi is hinting that its next phone will come with a lot of India-focused features. The phone will support up to 20 Indian languages. It will also have Google Assistant with support for Hindi language.

The Xiaomi Redmi Go mobile features a 5.0″ (12.7 cm) display with a screen resolution of HD (720 x 1280 pixels) and runs on Android v8.1 (Oreo) operating system. The device is powered by Quad core, 1.4 GHz, Cortex A53 processor paired with 1 GB of RAM. As far as the battery is concerned it has 3000 mAh.Additionally, the company has included an 8-megapixel rear camera with an LED flash as well as 5-megapixel front shooter in the smartphone. Flipkart teaser reveals that the phone will have auto-HDR support and 11 scene modes to make taking pictures a bit easier.

Although unconfirmed, Xiaomi Redmi Go appears to be a 16:9 aspect ratio screen, with thick non-screen space above and below the screen. The power and volume buttons are present on the right side of the phone, and capacitive keys for Android navigation – home, back and recents – have been placed below the screen. Redmi Go runs on Google’s Android 8.1 Oreo (Go Edition) and comes pre-installed with customised apps like Gmail Go, Assistant Go, Maps Go, etc. For the unintended, Google announced its ambitious Android Oreo Go edition. The Go edition was first announced at Google I/O 2017 and it meant for low-end devices that run with 512MB to 1GB of memory.

The South Korean company has announced that both the phones have seen ‘sold out’ and that the next sale is set for February 7 (Thursday). Samsung also claimed that the response had been “unprecedented” from consumers on both the channels.

After the launch of the M series it appears that xiaomi India has been greatly affected.  The company has been making subtle digs at the new Galaxy M series smartphone. Now, the Chinese smartphone major has announced discounts of up to Rs 2500 on its latest redmi 6 series smartphone. This announcement comes soon after Samsung hosted the first the first online sale of its Galaxy M10 and Galaxy M20 smartphone at 2pm today (February 5) on Amazon India’s website. These discounts last for three days between February 6th and February 8th

Samsung Galaxy M20 features the company’s all-new 6.3-inch Infinity V display and is the first phone from Samsung to sport a display notch design. Another highlight of the Galaxy M20 is its massive 5000mAh battery which comes with fast charging support. In the camera department, the M20 sports dual cameras with an ultra-wide lens. The Samsung Galaxy M10 features a 6.22-inch Infinity V display and packs a 3400mAh battery. It packs dual cameras with an ultra-wide lens.

The Samsung Galaxy M20 runs on Android 8.1 Oreo and features a 6.3-inch full-HD+ (1080×2340 pixels) Infinity-V Display with a 19.5:9 aspect ratio. The smartphone is powered by the Exynos 7904 SoC paired with up to 4GB of RAM. In the imaging department, the Samsung M20 comes equipped with dual rear cameras comprising of a 13-megapixel primary sensor and a 5-megapixel ultra-wide sensor, while an 8-megapixel sensor takes care of selfies.

The smaller Samsung M10, on the other hand, comes equipped with a 6.2-inch HD+ (720×1520 pixels) Infinity-V Display that has a 19:9 aspect ratio and runs on Android 8.1 Oreo. The Galaxy M10 is powered by an Exynos 7870 SoC, coupled with 2GB or 3GB of RAM. It sports a dual camera setup on the back that consists of a 13-megapixel primary sensor and a 5-megapixel secondary sensor, while there is a 5-megapixel sensor on the front.

In other Galaxy M-series news, Samsung is continuing to give the final touches to the Galaxy M10 and Galaxy M20 smartphones. The company this week released the first software updates for the phones, which are likely to pop up on the consumer’s versions of the phones as soon as the buyers connect their smartphones to the Internet. The update were minor and mainly included bug fixes and performance enhancements for the Samsung M20 and Galaxy M10.