Revolt RV 400 will be launched in India on July 22, 2019.  The pre booking of the bike had already started in Amazon as well as in company’s website. The token for the pre booking of the bike is of charge Rs. 1000. The features of the bike includes LED headlamp, a fully digital instrument cluster and 4G connectivity. The company is providing the buyers some additional features also. The buyers can choose from four different exhaust sounds and also can download more from the app. 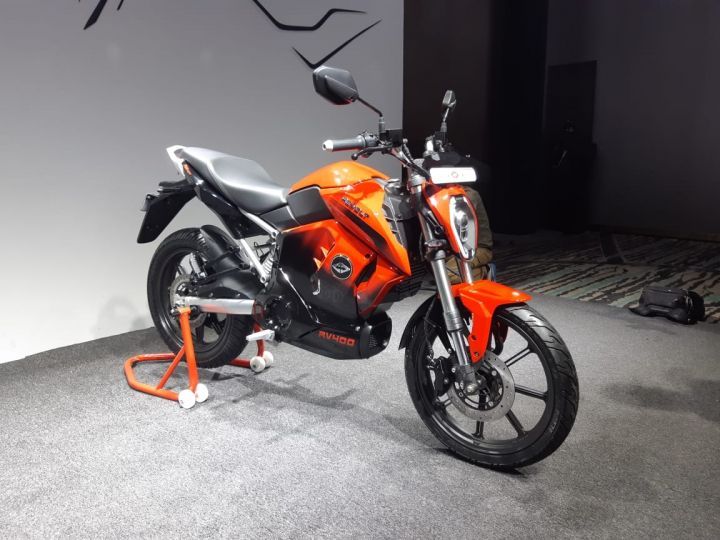 Also Read: US approves sale of Armed Drones to India

The estimated price of the RV 400 is Rs. 1 lakh as set by the company. The new model does not require any special charging. It can be charged through regular 15 ampere plug point. It also has IOT infrastructure in it that uses analytics to gives better riding tips to the user. The other features of RV 400 includes remote start, bike location, real-time riding information, navigation, battery ordering, finding the nearest mobile battery swapping point, changing motorcycle sounds and many more. Also it includes a bolt-on subframe, a USD fork, a monoshock and disc brakes in the bike.

The highest speed of RV 400 has been set to 85 kmph and an ARAI-certified range of 156km. The bike also has an app in which you can upload important documents like bike papers, driving licence and many more. The app of also has the feature through which one can track your bike. Also the app will show real-time range based on your riding patterns and also notify you the potential problems occur. The booking is opened of the customers of Delhi and Pune. Later within next week, customers from Chennai, Hyderabad, Mumbai, Ahmedabad, Kolkata and Bengaluru can do the booking of the bike. RV 400 will come in two color variants: Rebel Red and Cosmic Black.

US approves sale of Armed Drones to India

Ather Energy based in Bengaluru launched the new 450X electric scooter in India with prices starting at approximately 99,000 (ex-showroom, India). While, the Delhi price is around 85,000 (ex-showroom). Two performance packs will be offered for the new electric scooter-Plus and Pro are offered with monthly subscriptions or at an upfront cost. The Ather 450X Plus can be purchased at a subscription cost of as much as 1699 per month while the Ather 450X Pro is priced at as much as 1999 per month. The upfront cost for the 450X Plus is about 1.49 lakh (in Delhi, about 1.35 lakh), and the 450X Pro is about 1.59 lakh (in Delhi, about 1.45 lakh). Delhi’s prices are subject to state subsidies under the EV policy.

The latest Ather 450X is the powerful version of the 450 which is already on sale and comes with a host of enhancements including a bigger battery pack, more power and better performance. Visually, the 450X barring the handlebar doesn’t change much. But in addition to the white shade already on offer, it is now available in two new color choices-matte grey and mint green- Bookings for the Ather 450X will begin in multiple cities, with deliveries starting from July this year.

The biggest change on the Ather 450X is the introduction of larger battery cells requiring a new battery pack and now supporting up to 2.9 kWh, compared with 2.71 kWh on the Ather 450. Currently, the electric motor produces about 6 kW which is about 8 bhp, 0.8 bhp more than the standard version. Peak torque went up to 26 Nm by 6 Nm. The scooter has also seen a weight reduction of 11 kg and the top speed has been increased to 85 kmph. The electric scooter can sprint in just 3.3 seconds from 0-40 kmph, while grade capacity has increased to 20 degrees. The Ather 450X promises an 85 kmph range in Eco mode, and 75 km in Ride mode.

In place of the Linux system, the Ather 450X also gets a new Android-based user interface that brings greater adaptability. The system now comes with a Dark mode, and the Bluetooth connectivity feature allows you to receive or cancel incoming calls, play and change music while the navigation changes to more accurate reading.

As regards competition, the 450X will lock horns in the segment against the Bajaj Chetak, TVS iQube and Okinawa iPraise. With a new fabrication facility in Hosur, Tamil Nadu, the company is expanding its production operations. The company is planning to sell around 30,000 units this year and the new plant is targeting a significant margin to reduce the waiting time period.

One of the world’s largest electric car maker and the flag-bearer of electric car technology across the world, Tesla Motors, will arrive in India this year, or maybe in 2020. This has been confirmed by none other than Elon Musk himself in a tweet. The electric car-maker was earlier expected to arrive here in 2018 but that could not happen. The reason for this was said to be a restrictive government policy regarding EVs in India. However, this fresh interest shown by Musk in India means that the company may finally mark its presence here.If Tesla decides to come to India, Model 3 would be their 1st product as it is the most affordable Tesla car ever. It was in 2015 that PM Modi tweeted how he was impressed by the power wall technology of Tesla Motors which stores electricity in a battery for long term. Musk gave a presentation to PM Modi on the revolutionary technologies being developed by Tesla, which is likely to change the face of the motor industry and have wider implications on developing countries like India on renewable energy. To quote Elon Musk, Tesla will hopefully gain partial presence in India, Africa & South America end of next year, with broader expansion in 2020. And this is in addition to their expansion plans to Europe, China and Japan by the end of next year.In response to a tweet that asked about Tesla’ much-delayed India entry, Musk replied saying, “Would love to be there this year. If not, definitely next!”

Tesla is also the largest car-battery manufacturer in the world with Panasonic, claiming almost 60 per cent of the global production. While Tesla will set up car manufacturing facilities in China and Europe, the American company aims to set up battery manufacturing units in every continent to keep the costs in check. If Tesla enters the Indian market, it is likely to benefit from Indian government’s policies focusing on electric vehicles such as Adoption and Manufacture of Hybrid and Electric Vehicles (FAME). Currently, Tesla has Model S, Model X, Model 3 and the Roadster in their offering. The Model Y is also in the pre-production along with the improved Roadster, which is expected to be in the market by the year 2020.